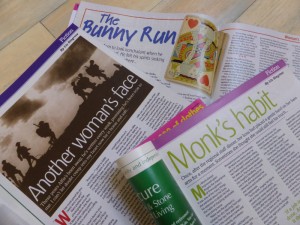 Over the years I have a number of Short Stories published in Women’s Magazines. Here is a selection:-

Tom watched the heat haze dance on the railway lines blurring the distant track.  He slid his hand into his jacket pocket and fingered the playing card, turned it over and over, wondering if he would see her tonight.

Arthur shuffled beside him, jingling coins, rubbing the toes of his shoes on the back of his trousers.  ‘Good turn out tonight, ain’t it?’

Glancing down the platform Tom saw girls in summer dresses and peep-toe sandals linked arms with friends; young men his own age stood alongside the girls, practicing their banter, as nervous as he was.  ‘We’ve got to get our fun while we can, Mate.’

‘Oh, it’ll be alright.  My mam says Hitler’s bound to back down and …’

The whistle blew at the crossing, drowning Arthur’s words.  Steam clouded white against the sky and the engine swam into the haze, taking solid shape as it approached.

‘Bunny run is it, Lads?’  The station master strode past them.  ‘Won’t be too many of them when there’s a war on.’
Read the Whole Story

Mr Monk always impressed upon Angela the importance of thoroughness.  It was one of the many things she admired about her boss, his attention to detail. He had the habit of checking everything twice.

‘Make sure the garment is suitable for dry cleaning,’ he’d said on her first day, five years ago.  ‘Write the customer’s name and number correctly, and always check the pockets.’

Sometimes she watched him handling the clothes.  He had nice hands which, she knew, would never slap or bruise anyone.  He owned a cottage in Brittany, Angela was terrified he might go and live there.

He told her he’d once found a gun in a jacket.  She listened enthralled as he described how, with trembling fingers, he’d checked to see if it was loaded (it wasn’t) and then he’d called the police.  The owner never returned to collect it.
Read the Whole Story

‘What more proof do you need, Vera my girl?’

Mam pushes the photograph across the table.  It leaves tracks in the flour she spilled while rolling pastry.  The snapshot is worn and curling at the edges.

‘Another woman’s face in your husband’s pocket.’  She taps it with her finger, a sifting of flour settles over the large eyes and smiling mouth.

‘Alfie says he’s done nothing wrong, and I believe him.’  I meet Mam’s eye although my legs shake beneath my skirt.

‘You know about it?  So what does he have to say for himself?’  She narrows her eyes, but I say nothing.  I believe Alfie; of course I do.  These years he’s been away he’s written every week, promising he’s been true to me.  I can’t let doubt creep into my heart now he is home and safe, his body not broken or maimed like so many others.